Start typing and press
Enter to search
Skip to content

After taking First Place in the coveted NATS Artist Award Competition in Nashville, Tennessee, soprano Courtney Huffman made her New York solo recital debut at Carnegie Hall. About Courtney/’s performance in Long Beach Opera/’s U.S. Premiere of Vivaldi’s Motezuma. Mark Swed with the LA Times wrote, “Teutile…brilliantly sung by a young soprano, Courtney Huffman, just entering the professional arena, is treated as a supercilious young starlet…She sings and steals the stage…I hope opera talent scouts were on hand.” Her stage credits include Yadwiga in Ben Moore’s Enemies, A Love Story, Violetta in La Traviata, Betty in Lowell Liebermann’s Miss Lonelyhearts, Frasquita in Carmen, and Zerlina in Don Giovanni. An equally accomplished concert artist, Ms. Huffman has been a featured soloist with Boston Baroque, performing the role of Amor in a semi-staged version of Gluck’s Orfeo ed Euridice, and appearing as the soprano soloist in Bach’s Wedding Cantata and Coffee Cantata. Her love for recital work has taken her all over the world, including a ten-day concert tour throughout Southern China, and her passion for contemporary music has given her the opportunity to work with and premiere pieces by many distinguished composers such as Alan Chan, Lori Laitman, Ben Moore, Timothy Takach, and Marc-André Dalbavie. On faculty at Gordon College from 2013 to 2017, Ms. Huffman was a frequent performer on its Faculty Artist Series and presented works by a variety of composers with her fellow colleagues. New to the voice faculty at Bradley University, this past fall she joined cellist Barbara Hedlund, violinist Seul Lee, and Bradley faculty pianist Chee Hyeon Choi for a program featuring arrangements of a Bach cantata, Mozart aria, and Strauss Lied for soprano and piano trio. Huffman is passionate about teaching the next generation of singing actors and currently serves on the voice faculty of Bradley University in Peoria, IL. 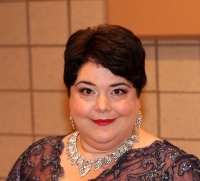 Soprano Alison Meuth has spent the last fifteen years singing opera at the professional level.  Some of her favorite roles include Liu in Turandot, Tosca, Suor Angelica, The Mother in Amahl and the Night Visitors,  Donna Elvira in Don Giovanni, Sarah Good in The Crucible, Santuzza in Cavalleria Rusticana and Soprano Soloist in Verdi’s Requiem to name a few.  She spent several years as a member of The Opera Illinois Young Artist\’s Program where she taught people in the community about opera by performing concerts and opera scenes. Alison has had the privilege of working with Sarasota Opera, Utah Festival Opera,  Annapolis Opera, Galesburg Community Chorus, Saint Martin Chamber Players, Bradley University New Music Faculty Ensemble and Opera Illinois. Alison is married to her ever supportive husband Jeremy. Together they homeschool their three children. Alison is passionate about The Charlotte Mason Method.  She uses the method as she teaches her own children and her college students at Knox College. At Knox Alison teaches private lessons and Vocal Pedagogy as well as directs their opera program. Alison also conducts The Peoria Cooperative Academy’s Homeschool Choir, Madrigal Singers and Musical Theater Troupe.  Alison loves to use her gifts to glorify God. She also directs The Chancel Choir for The First Presbyterian Church Of Galesburg Illinois.

Stephen Williams, baritone, is a self-employed contractor and custom builder with a bachelor’s degree in engineering from Bradley University. As a Bradley student, Steve sang with the Bradley Chorale and Community Chorus. He studied voice with the late Dr. John Davis of Bradley University and now studies with Jerry Siena of the University of Illinois at Champaign – Urbana. He has served as Pontifical Cantor at The Cathedral of Saint Mary of the Immaculate Conception in Peoria from 2000 to present. Steve was awarded both honorable mention in 2000 and first prize winner in 2002 in the adult division of the NATS (National Association of Teachers of Singers) competitions. Steve has been a repeat soloist with Saint Martin Chamber Group and Chamber Players, Dramatic Crossroads, and Bradley Community Chorus. He has performed the baritone arias in oratorios including multiple productions of Handel’s Messiah, Mendelssohn’s Elijah, and Faure’s Requiem. Steve has performed excerpts of several operas including those of Le Nozze Di Figaro, Don Giovanni, Die Zauberflote, Il Barbiere Di Siviglia, Rigoletto, La Traviata, Pearl Fishers, and played the lead role in Menotti’s The Telephone.